Is your faith strong enough to withstand tragedy?  Or perhaps, is it flexible enough?  What if you are forced to admit that it does not provide you all of the answers, or that some of the answers you had may have been wrong?  Will you reject your former beliefs and scorn those who do not?  Do you have a deep enough or open enough belief that can withstand the harshest or storms, the cruelest of surprises?  These are just some of the questions that HBO’s new series The Leftovers asks… beyond simply, What happened to all of those people??!

The series, based on Tom Perrotta’s book by the same title, is something like HBO’s version of LOST.  The basic premise of the show is that 140 million people across the world suddenly disappeared, and those left behind must cope with what that means in their personal and civic lives.  Meanwhile, the mystery of what happened to the departed persists.

There is no polar bear or black smoke on the show, but the episodes nonetheless share LOST’s supernatural and theological intrigue (being co-created by LOST’s Damon Lindelof).  The possibility that the departed were actually raptured by God creates strife among those remaining, with street hecklers warning not to trust the Pope (who stayed behind) and church leaders left unable to explain what the random selection of those missing might mean.

Grief is the main emotional thread through the show – people have tragically lost their loved ones and cannot explain how or why.  The question “Why do bad things happen?” has persisted since the days of the Psalmist crying out “How long, O Lord?!” and is part of what this television show asks couch potatoes to indulge in.  At its best, the story asks viewers to consider much more than particular plot points and instead asks, can the viewer’s own faith survive the tragic and unexplained?  Are the viewer’s beliefs built to weather the most intimate of loss?

Individual episodes are not based on investigations into the departure (which was now three years ago) or as round tables conversing in salon fashion over the theological impacts.  Instead, the daily lives of the interesting characters the tragedy spawns are followed – a woman who works for the government’s Department of Sudden Departure goes to a conference to discuss her work and is confronted by protestors.. or the chief of police (Justin Theroux) must find the stolen baby Jesus from the town’s nativity display while investigating the murder of a local do-not-forget cult member [Spoiler: the Aforda baby doll was stolen by the chief’s angsty daughter who struggles after her brother fades into the wind and her mother (Amy Brennemen) joins the cult, “The Guilty Remnant”].

Nevertheless, the episodes contain more than enough allusions to the supernatural and the religious to keep viewers spiritually oriented: Doctor Who’s Christopher Eccleston plays a priest who loses his church to a bad mortgage only to have a cryptic series of birds lead him to money, television pundits debate theology in the background of scenes, the opening credits feature an animated cathedral style fresco, and a dangerous guru named Wayne (Paterson Joseph) apparently has mystical powers to heal people of their grief.

The answer to the show’s disappearance plot may turn out to be aliens, or the government, or perhaps they’re all in purgatory… but that detail is not the most important part of the show.  In some ways, that plot detail does not matter.  It is the basic motivational premise that provides viewers the richest spiritual meat to chew on – i.e., What if you are unequivocally confronted with something that discredits your understanding of your faith?  What will you do then?

The pseudo-rapture story may seem far-fetched, but in the real world of viewers, these jarring moments do happen.  Loved ones die, children starve, leaders abuse and defile, and diseases ravage.  Even on the small scale, individuals interpret sacred texts differently – some out of ignorance, some of out of intellectual difference (the rapture itself has inspired many different views).  A question posed by this show is, What happens to your faith when you encounter those moments?  Is your faith merely a social habit you perform? Are you arrogant in your interpretation?  Or is your faith big enough, deep enough, focused enough, open enough, to persist?

If it is, perhaps that means also being willing to let jarring evidence to the contrary CHANGE some of your beliefs.  Maybe the fundamentals of your faith are not concerned with the minutia of your daily life or the decisions of others in the way that you thought.  Perhaps your faith is strong enough to evolve. 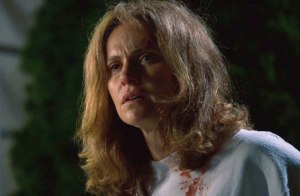 The show is heavy, but it is also well-produced.  As a cable program, outside the pages of Perrotta’s novel, the episodes thrive off from the movingly burdened acting from its cast.  The show hits very few happy notes (mostly from Max and Charlie Carver), but viewers willing to feel will have more than enough inspiration from actors Theroux, Liv Tyler, Carrie Coon, and Brenneman (whose Guilty Remnant character has taken a complete vow of silence).

This, of course, is not the sort of program churches should be showing in their Wednesday night Bible studies.  It is an HBO series, after all, so there’s nudity, overt sexuality, excessive language, and bloody violence.  (In fairness, most is in service to the story, even if only to establish tone and context.)  The thought-project is important, though.  While its style is antithetical to the Bible’s caution against such graphic excess, the fundamental question of The Leftovers is still an edifying one for the church… for individual believers.

In the face of something new, do you have the sort of faith that knows its core values and is willing to shed the excess?  Are you willing to be open?  Willing to change? Willing to believe?

2 thoughts on “Will your faith survive The Leftovers?”