We’ve been wondering for a couple seasons now exactly how Alicia would describe her own religious beliefs on CBS’s solid legal drama “The Good Wife.” In season 2, we first saw the likeable, semi-elite mother Alicia Florrick (Julianna Margulies) wrestle with her daughter Grace’s (Makenzie Vega) foray into religion. Meanwhile, the estranged father and eventual Illinois State’s Attorney Peter (Chris Noth) found his own possibly-strategic conversion to Christian faith while in prison. 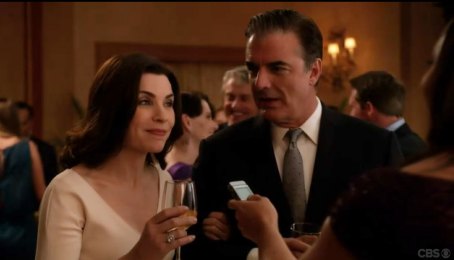 In season 3, Alicia and the home viewers were scared into thinking that something tragic had happened to Grace when she disappeared in the tense episode “Parenting Made Easy.” Grace was eventually found by the Emmy-winning Archie Panjabi’s clever investigator character, Kalinda Sharma — she hadn’t snuck off to do drugs or see a boy; her phone battery simply died as she went alone to get baptized without telling any of her family.

These stories have provided a provocative religious thread throughout the seasons, but we finally heard Alicia spill on her beliefs on Sunday night’s “The Seven Day Rule” episode. Maybe just a little tipsy, Alicia ignored the political implications of her beliefs. Her husband’s current campaign had expected her to say she was at least “open” to belief in God in order to paint an atheist political rival in a negative light. Honesty (and a little bitterness) demanded otherwise for St. Alicia, though, and she proclaimed her disbelief in God in no uncertain terms – “I’m an atheist,” she told the reporter.

The episode did not pursue the issue further (the show has a habit of leaving the religious thread incomplete). It will be interesting to see what this does for not only Alicia’s character, but also for viewer relationship to her. In the episode, campaign manager Eli Gold (Alan Cumming) made clear that voters wanted “St. Alicia” to believe in God (see CLIP over at CBS); I wonder to what degree that also reflects the desires of the actual American viewing public (79% of whom identify as having some religious affiliation, according to PEW data) which enjoys relating to their favorite characters.

Alicia Florrick is a clever, well-liked character who has been shown to have her own flaws. Will atheism turn folks away? Probably not. It’s not that viewers will identify with her atheism, but television viewers are trained not to expect religious belief out of their TV characters (less than 6 percent of television characters have religious identities according to a study by Scott Clarke at Michigan State University). So an atheist main character? Doesn’t come as a huge surprise. May be a bummer for some hoping for an “agnostic” Mrs. Florrick, but it’s probably not a big surprise to most viewers.

The real question is what they will do for the other characters. Will Grace be proven too naïve and Peter too calculative for sincere and acceptable belief? Will the writers keep open the possibility that religious belief may be a good thing? Or will Alicia’s atheism overshadow all other belief and serve as a criticism of faith?

Sound off in the Comments below – do you think this will affect viewers’ love for this well-crafted show? Will it force other changes in upcoming episodes? Were you bummed or relieved to hear her finally say it – she’s an atheist?

33 thoughts on “So much for St. Alicia: The Good Wife and Atheism”